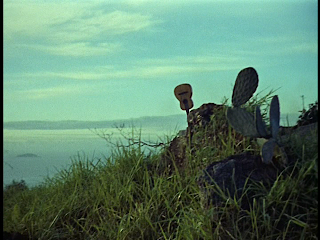 According to the legend, the guitar passes on to a new singer of the morning, in far-off countries, cultures and continents, and the singer calls in the sun to rise from the seas of unrecorded life.

There’s the madness and the melancholy of Rio de Janeiro, the carnival, the beginning and end of sorrow for a people who live high on the mountains but descend on carnival day, to dance away all sorrows. And here lives the smiling tram car conductor Orpheus with his guitar which makes the sun rise every day, and grief rising like vapours or sweat. 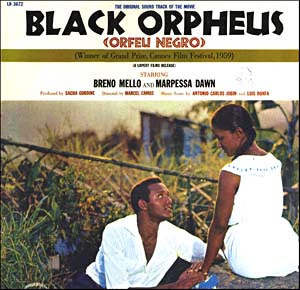 The guitar tells the story of the music, weaving the classical Greek story in the bossa nova beat and the triumphal strum, of beautiful Eurydice and unrequited love…. there in the background is the tambourine played by the magic kid of sorrow, love, death or time who observes all and teaches nothing except to celebrate particulate forms of life in the middle of the expanding darkness of drudgery. 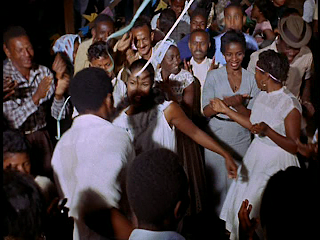 After Eurydice is chased by a mysterious death and dies of an electrocution, Orpheus goes searching for her in the hell of the hospital and the missing person’s squad. The sweeper tells him life and people are never found in the papers and documents, and through circular staircases where people and names fall off like strewn paper, they go to a voodoo ceremony where the dead are supposed to descend. 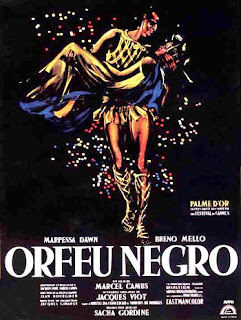 Orpheus returns to the cliff, the slum overlooking the sea and Rio de Janeiro, and falls off the cliff after the Bacchanalian women, those who were part of the carnival, try chasing him. 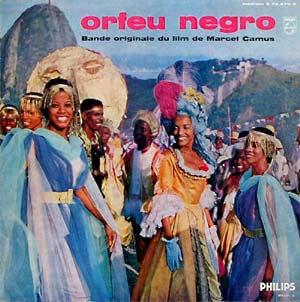 Here in India, things are perhaps the same, or perhaps different, for though there are the same people, the plains here stretch away for miles, there are no mountains to call in the skies, and most artists and directors too concerned with middle or upper-class sentimentality in the heavenly supermarkets or in computer-generated violence to attempt something like Marcel Camus’s epic creation… and the music, it’s the music that touches you deep inside, the lives and songs of the unrecorded live on in children’s voices… in the dance of life of the three kids who watch the sun rising. 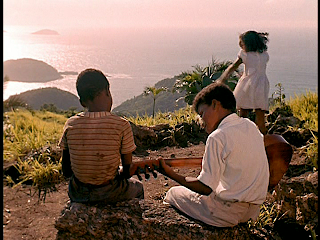 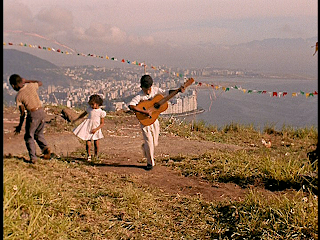 I feel guilty for having watched this, this late…. and i share the guilt with all who prefer to keep their eyes closed.
at Thursday, August 16, 2007 No comments:

a sea in between

This goes in after a month and there’s literally a sea in between, i have quitted the job of being a compromising journalist, called it quits and decided for once i’m not going back to that business for anything, and i enjoyed two weeks of sitting back at home and reading Les Miserables, the unabridged English translation I had dug up from my mamabari sometime in 2001, the yellowing book, bought sometime in the 1950s, its spine collapsing but its crumbling pages still carrying the marks of the binder’s fault, i am the first person to read this copy of this version and I now know what a man like Hugo has to say in spite of his didacticisms in a book that took him 17 years to write, more than Jean Valjean, I’m more impressed with the unnamed conventionist who meets M. Bienvenu before the radical revolutionary’s supreme act of defiance, and the Baron, the sergeant Pontmercy, the father of Marius, who quietly grew flowers till the end of his life, and I gobble up Osamu Tezuka’s Buddha, the ending disappoints me, read Doctorow’s Loon Lake and imagine the America the was never to be, taken a trip to the sea, burnt up my skin and caught a flare in my nostrils, and read Ellie and the Shadow Man by Maurice Gee( a disappointing New Zealander whom I don’t want to read twice, watched the evening melt down into the night while the sounds of the hammers fade away from the building they are constructing right opposite to our balcony…. Here it is, I have left the city, which once used to be the capital of British India and landed in the city of the nababs… the journey begins… from here?
at Friday, August 10, 2007 No comments: