Teer-lil-lilli-dong: Chuck and Geck and Other Books by Arkady Gaidar

Who remembers Arkady Gaidar? At some point in my childhood, when the sky was full of stars, I happened to read the adventures of Chuck and Geck,  their long journey on the Trans-Siberian railway and on a sledge across the hoary taiga in search of their adventuring father.

It was probably the best children's book from the Soviet era: it found a readership across continents, and touched the hearts of many eight-year-old kids who lived in cramped Indian cities. Alongside heroes and villains of Indian and British-American persuasions, their good friends were the brave Chuck and Geck, Vasilisa the beautiful, Ivan the dragon-slayer, and Makar the unlucky Yakut. They dreamed endlessly as they stared across muddy roads and dusty alleys that they knew led to exotic lands filled with adventures: they talked to their friends in their dreams. It was such a good book written in wonderful prose, and beautifully illustrated in black and white.

Now that's all far, far away, and the eight-year-old children have all grown up. For those of them who are still alive, the Soviet Union has become a dull and disturbing subject filling many history books while the publishers of these wonderful books (Mir, Vostok, Raduga) have ceased to exist. Most of these children live like old people now: their adult selves uneasy with the horrors perpetrated in the name of communism; uneasier still, witnessing the way commodities nastily distort the dreams of the children they see around them.

But in the middle of the night, in the strangest moments of reminiscing childhood, those older children--the readers of Arkady Gaidar-- have curious dreams.

They dream of a thousand lives, they dream of lonely death. From the darkened hovels where they live in, from the smoggiest zones of some Indian city lit with a thousand neon signs, they dream of  strange loud bells ringing in faraway Moscow on a Christmas night. On a hot sweaty summer night, they smell the snow falling on the fir trees of the endless Taiga, and breathe at ease. They see the bear and the wold leap across their windows: they are not afraid. But as they drift off to sleep, they wonder: what do children read now? 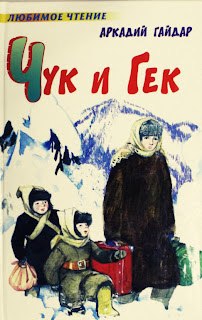 For those like me still searching for the works of Arkady Gaider in the ether, here are the download links to three pdf files: three books from the forgotten master. It's still a great pleasure to read them, but ah, the pictures and wonderful illustrations, the dog-eared pages of a book thumbed breathlessly a thousand times, and the eight-year-old mind are badly missed:
Chuck and Geck
Timur and his Squad
The School