Growl! I received that mail for the umpteenth time! Earlier I had it from MBAs, corporate executives, NGO scions, smart-ass journalists, and from postgraduate people whose CVs exhibit a dose of 'liberal humanistic education' comprising Aristotle, Hume, Kant, Marx, Foucault, and also all that post-colonial shit.

After a never-ending list of people it is forwarded to, you get to see a picture of a grim-faced deity (I guess of Tamil origin) and a message drafted and highlighted in red and blue by someone who hadn't learnt elementary grammar in primary school.

T. Ratan received this picture, gave it to his secretary to make copies but they forgot to distribute: she lost her job and he lost his family. 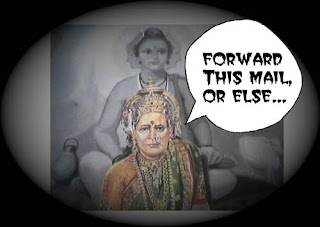 My usual response had been:

I happen to be an atheist, and I don't believe in luck.
Please refrain in sending me these kinds of stoopid messages in the future, or you might make your goddess really angry. Thanks :)

Or sometimes I had come out sarcastic:

I had lost my brand new Nataraj pencil last week. A Persian god and a Scandanavian god appeared in my dream, and asked me to send it to you and ten other stoopid people who believe that they'll have a box of crayons soon by forwarding this mail.

Don't ignore this mail, or the wrath of 10, 000 Tibetan and Malaysian gods will fall on you. Amen.

But these deeply religious and mortally afraid people have refused to relent. I wish I could send something materially hard (like a bamboo with nails sticking out of it) to the original sender of this mail, without hurting his religious sentiment, so that the person could shove it up his ass, and stay put in religious serenity. Things like that are not possible in a secular state of things, I know. But the wish grows stronger by the day.
at Thursday, April 09, 2009 1 comment: 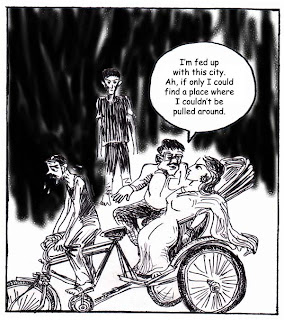 And in another land and time, a Marmdadoff tells a schismatic student who might not be Raskolnikoff:
"Can you understand, sir, what it means to have nowhere to go to? You don't? Don't realise that yet?"
at Friday, April 03, 2009 No comments: