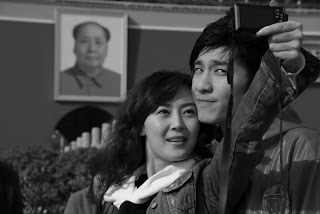 A young couple pose for a photo in front of
Jinshui Bridge in Tian'anmen Square, Beijing, on March 23, 2009.


Student protestors struggle with soldiers from the Chinese Army,
the PLA, at Tian'anmen Square, on June 3, 1989.

Both the pictures share two common features: youth and Tian'anmen Square.
No points for guessing the difference.

(Pix Credits: The first is from The China Daily, a showcase of photographs by 100 photographers, part of the 'Chinese Revolution's 60 years celebration that is coming soon. The second is from the Asian history section of About.com which records the butchering of student protesters by the PLA. )
at Wednesday, July 01, 2009 2 comments: