Time to remember Johnny Sokko and his flying robot

We came into this world when all the old and serious ideologies were either dead or had transformed themselves into churches with their own fine-combed distinctions. We were to learn it later. We came into the world of a post-liberalisation India long before when Remo Fernandes and Juhi Chawla danced their hats off and told us to stick bottles of Lehar Pepsi up our butts, and forget everything. The TV was then a blue tube enclosed in shutters and standing on wobbly legs: the thunder cats quivered on the screen as a light breeze shook the antennae on the terrace. But smart and feisty Johnny Sokko ruled our world, fighting monsters, godzillas, and evil scientists with a violence that always seems to attract children. 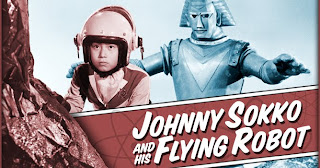 "Robot, robot", I used to whisper earnestly to the invisible matchbox tied to my wrist with a string. It was always the Johhny Sokko watch. "Grrrr" went the robot and "Swisssh!" he fired a missile off his gingerly fingers. He always used to grow new fingers. And then there was me playing the robot. And me was not alone. It was we who played the robot.

I did not know then it was a Japanese TV series of the sixties run twenty years later in a country that was "closed", and where the children were getting used to a society that did not know where the hell it was going. It still doesn't know. Neither do we know what happened to that confused childhood that was severely constrained in space and time by aliens of the bad planet of the adults. But as I write these lines, I know that in a way it is that which keeps us going. We're all tied to our times, but there's always a magic watch summoning us through the hazes and mists of the knowledgeable world, through serious and complex analyses, to a time when imagination represented what we are, and what we will be...